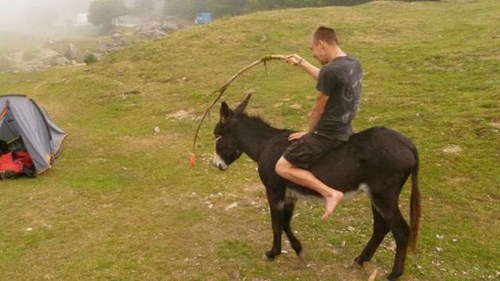 Early into the Abbott government’s term, the Coalition realised that something had gone wrong. While Direct Action and the promise of cheaper electricity were enough to get the team in, scepticism on both fronts began to creep into the general population.

Concerned about public opinion and especially in keeping the public informed, members of the party began bugging journalists for interviews.

Reluctantly (as many journalists were in the middle of solitare on their Desktops) some granted them interviews.

It took a few weeks, but repetition paid off and soon an almost audible gasp of amazement spread over Australia.

Direct Action was a carrot! Of course!

The method being adopted globally and in the early stages of conception within our boarders, that is a carbon price, was nothing but a whipping stick to punish polluters. Direct Action rewarded self-motivated good behaviour.

The people finally got it and opinion of the new government rose to record breaking heights. Some, more motivated members of the public took it a step further, pledging donations to various big business if they were able to clean up their activities.

It became a national past-time, with Australian shares taking over the market.

Amazed by this phenomena, the Coalition realised just how powerful the tool they developed really was. Soon, the carrot was appearing in legislation to revolutionize everything in Australia.

Cameras were set up on every roadway. Speeding by these cameras no longer meant a fine appearing in your letter box, no. Bad drivers just missed out on the cheques that good drivers were sent annually.

So too, prisons nationally were closed for good. Good behaviour was instead rewarded by a larger tax return an naughty members of the community missed out.

Following the triumphant second election win which saw the largest swing towards a single party in history, the Coalition quickly implemented new legislation that allowed them to hand over a “carrot”, in the form of payment, to media providers that had been highly positive of the Coalition over the election period. Murdoch himself, wrote a personal letter of thanks and praise that appeared across his media empire.

Before long, the carrot was adopted as the icon for the Coalition, to massive approval from the general public.

Tony remained Prime Minister until he retired on his own accord. There were many tears shed that day, even from all the other parties (small and trivial as they had become).

In his honour, above Parliament House in place of the Australian flag, a bigger than life brass statue was erected. It sported Tony riding a giant Clydesdale, rearing, with “business” stamped on its hide. In his left hand he held a rod (not a stick), like a jousting sword, with a carrot dangling from its tip.