I’ve been very interesting with the problem of responding to anti-science. This is mostly due to the frustration that arises from taking them seriously only to be subjected to a cheap magic show rich with fallacious arguments. Diethelm and McKee (2009) provide excellent examples, including;

“The normal academic response to an opposing argument is to engage with it, testing the strengths and weaknesses of the differing views, in the expectations that the truth will emerge through a process of debate. However, this requires that both parties obey certain ground rules, such as a willingness to look at the evidence as a whole, to reject deliberate distortions and to accept principles of logic. A meaningful discourse is impossible when one party rejects these rules.”

In seeking out certainty in reality, this objection to the best developed tools for obtaining high quality empirical data remains baffling. Moreover, anti-science provides no serious alternative, but instead dynamite to the dam walled placed up against the baseless ideation popular prior to the enlightenment.

Of course ignoring anti-science outright is not the answer as the anti-fluoridation campaign illustrates; while in essence it is fringe and largely based upon “Nazi chemical mind control” fears, packaged right, it has the power to infiltrate communities, leading to a decrease in dental health with no additional benefits, as has been witnessed in various towns in Queensland, Portland, Oregon and elsewhere.

We need to respond.

However, as Christopher Monckton illustrated with climate change, taking them seriously comes with the inherent risk of lending undue credit; he is now regarded as an “expert” in some quarters due solely to the fact that he has publicly debated with scientists and seemed to have won. That his waves failed to reach the shores of scientific endeavour is telling nonetheless.

Recently, I analysed the components of an anti-science speech to show how it does not aligned within the same arena of critical thought to scientific methodology and thus presents a sideshow distraction rather than a rebuttal. Yet, what to do with a wordplay debate?

I provided the following basic questions to use to assess the quality of someone’s argument;

Here, I will look at the comments of “Dan” who is an individual I’ve spotted haunting both NewAnthro and Watching the Deniers of late to give some suggestions.

Dan takes an anti-science approach to climate science. This is not to poison the well, but a factual stances he must admit to simply because his position rejects the standing position held with high confidence within the scientific community, namely, he rejects the conclusion that CO2 can impact on the global climate.

His argument against the standing position within the expert community of climate science hinges on a quote he found on Wikipedia by, Richard Horten, editor of the Lancet, which is critical of the peer review process.

To answer the three questions above;

It fails on step one. Furthermore, rather than illustrating how the conclusions drawn within climate science are wrong, he instead attacks the review process. Yet, if the science is wrong and he knows it is, he should be able to illustrate as much, for the validity of a conclusion does not sit on the opinions of people, but on the merit of the finding. His argument does not challenge the the scientific conclusion itself.

Mainly, he relies on three fallacies; the single cause, composition and authority.

Just as you wouldn’t attempt to measure the volume of a pool by a sole measurement of the depth of the shallow end, it is a failure of understanding to assume that climate change is restricted to the temperature anomaly.

Add energy to a pot of water and the temperature will increase. Eventually, around 100°C, the rate of temperature will reduce, even if the energy input continues. This is because the energy is now going into a physical process not measured by a thermometer; the conversion of liquid to gas.

Climate change is dynamic, with energy going into the atmosphere, but also the oceans and ice, leading to latent heat; ice melt and water vapour, both ignored by thermometers, but measured by other methodologies, such as physical measuring and eddy covariance measurements respectively.

His quote also assumes that, as one person in a health journal is critical of peer review, we have evidence enough that the entire process is flawed. The quote itself is somewhat fallacious – ad populum – and how it is applied is fallacious through authority and composition.

As previously noted, rather than fault the conclusions, he attempts to fault the entire scientific process with this one small quote.

I know first-hand that pointing out these faults do nothing to the argument being presented – shifting goalposts may be applied or semantics may come into the debate, alongside repetition of the same fallacious claims. Eventually, the moral high ground will come up and your efforts will have been a waste as the individual goes on to continue the same debunked claims elsewhere unmoved by your exchange.

It may be useful to respond concisely;

Do the following claims by Dan seriously challenge climate science?

“No warming over the past decade while CO2 levels increase…” – No; warming is only one part of climate change, with energy also being taken up in processes not measured by thermometers, eg. latent heat.

“Richard Horten says peer review doesn’t work…” – No; in no way does this even critique the empirical evidence base for anthropogenic climate change, but is a fallacy of composition based upon appeals to authority, serving no purpose but to subvert critical reflection of the evidence base at hand.

Otherwise, praise the commentator on their prowess and let them know how much you’re looking forward to their radical findings overturning modern science as we know it – surely they will receive their much owed Nobel Prize once their ground breaking research is published in a respected science journal. After that, walk on.

You can waste your life replying to nonsense – fiction is limited only by imagination and our species is capable of many generations worth of imagination. Or less eloquently put; 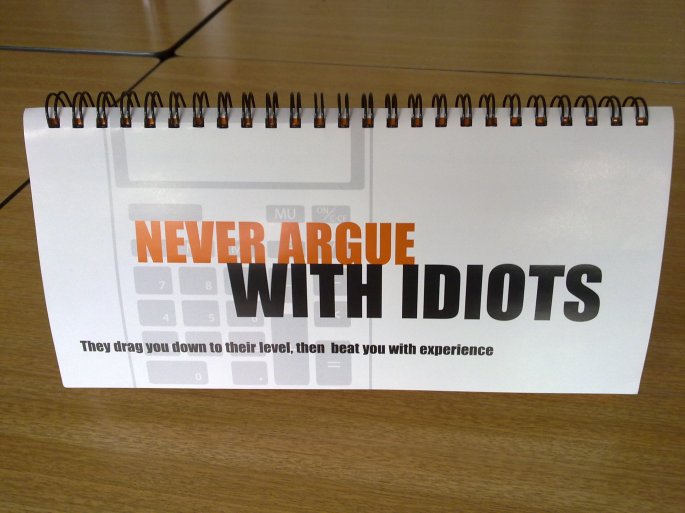 One thought on “Anti-science arguments: How do we respond?”