I have to thank Rick Santorum [h/t to Peter Sinclair] for a little gem. It’s clearly a wasted effort, he laments, in thinking committed scepticism on anthropogenic climate change will eventually rub off on smart people.* 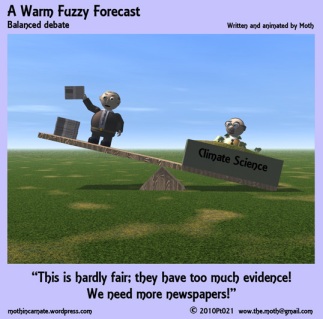 For all the smug talk, the multitude of “final nails in the coffin of ACC”, the ground smashing truths about to be washed over us in the next “Climategate” or IPCC-truth book or pearls of wisdom offered from the illustrious minds of the Plimer, Monckton, Evans, etc, where is the slapped to the face within the realms of academic research? Why is it business-as-usual, for both the hot-headed “sceptics” and the slow, thoughtful progress of reason? Why, if bad ideas crack under pressure, do we see countless accusations, sidesteps and misrepresentations to challenge the same ol’ ACC that seems to remain immune to them?

It surely must require a true leap of faith to ignore not a unbalanced “debate” as I once suggested (“Balanced debate”), but rather such confounding conclusions that must be drawn from answering such questions.

There are contrary scientists, true, but little in the way of compelling counter-arguments provided by them that endure  critical examination by peers. “Conspiracy! Scientists are silencing dissenters!”

Yeah right, free speech is so endangered we don’t have groups like The Westboro Baptist Church and Monckton fails time and time again to berate ad nauseam… oh wait…

I could, of course, go on to the whole host of points raised by committed sceptics, but others have already done this. I could as easily go onto the counter reply (typically conspiracy in nature, from stolen emails proving this and that to the flat out insanity of a secret banker plot dating back to the Middle Ages), but many have also discussed this (or simply bulked at the mind-numbingly desperate detachment from reality). However, I won’t; we both have better things to do with our time.

What remains is that the evidence for anthropogenic climate change trudges on regardless of how much we test it. If anything, we’re now beyond the point of “if” and instead defining “how much” with ever increasing certainty. It is tell that not one of the contrarian arguments persistently leaves the expert scientific body stumped – a point demonstrated most coherently by contrarians themselves through being unable to stick to the one “devastating” argument alone, preferring instead to rely on an ongoing barrage of noise.

Smart people couldn’t be expected to believe such a position or else they couldn’t be called a smart person!

In the wise words of Tim Minchin; “Science adjust it’s views based on what’s observed. Faith is the denial of observation, so that belief can be preserved.”

Wisdom is inconsistent with a mind frozen in place. Fabricating an elaborate, yet fictitious, foundation to support a faulty position maybe be clever, but it isn’t smart. Here, I disagree with Santorum in that it is egotistical to be convinced that our activities are able to modify processes in the natural world, but rather in having a strong enough conviction to believe otherwise in the face of compelling evidence.

The two extraordinary claims on offer are; 1) human activity can effective natural processes, such as climate change, and 2) there is corruption that runs so deep, it covers almost the entire global community of active and relevant researchers, potentially multi-generational, that, for whatever secret agenda (eg. personal gain – if not for them, generations of researchers who follow them; world domination etc), actively undermines free speech and critical investigation of the natural world.

With the wealth of critical scientific literature available to digest and the many broken “final nails” and earth shattering books that, in retrospect, seem to have only produced the faintest ripple, what should Santorum expect of smart people? It’s like being disappointed in people who set off on cruises, certain they won’t fall off the edge of the earth, because they reject an ancient myth for a credible, coherent and consistent body of evidence.

A leap of faith, but definition, demands blind conviction to a belief. It’s reasonable, if so required, that belief in a flat earth could be an essential leap of faith. Likewise, such strong conviction to reject the scientific evidence (arguably without proper investigation and/or adequate understanding) in favour of flimsy factoids that support the latter extraordinary claim seems to be equally fuelled by an underlying belief, otherwise we would have a scientifically strong argument which would allow us all to rejoice in the erroneous conclusions of ACC.

It’s not forthcoming, so neither could the “smart people” to Rick Santorum’s conclusions.

* In all fairness, he does specify “elite” smart people – but what on earth does that mean? Has he spent much time around working science academics? I think the answer is a definitive “NO”.

2 thoughts on “Rick Santorum Laments: Smart People Don’t Get the Message of the Committed Sceptic”